As the top movie in the US, The Force Awakens brings back many of the favorite characters from the original trilogy of Star Wars, including Princess Leia. She has lost her regal title, and is now known as General Leia Organa. The Force Awakens takes place about 30 years after the events of Return of the Jedi, roughly equal to the time that has passed in the real world between the films’ releases.

The time has left its mark on all the actors, but perhaps the one who has visibly aged the most is Carrie Fisher, and it may be partly because of her dentures. 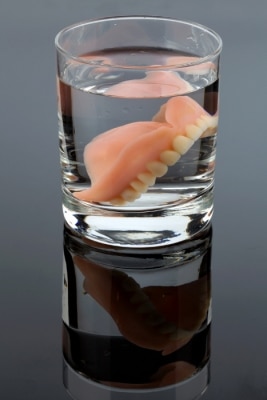 Even while she was filming the original Star Wars movies, Carrie Fisher was using drugs and alcohol heavily. She was grappling with undiagnosed mental illness, trying to self-medicate while also being swept up into the whirl of Hollywood in the 70s and 80s.

Even after being diagnosed with bipolar disorder, Fisher had to deal with the harsh treatments available at the time, which included shock therapy. As her finances and her connections failed her, she began seeking ways to continue to feed her addictions.

By most accounts, including, at some points, her own–though she admits her memory for some of these events is not very good–she had some of her teeth pulled in order to get prescription painkillers. So she has worn dentures since a relatively young age.

Weight Loss and a Return to the Public Eye

As a result of her addictions and other struggles, Fisher had gained significant amounts of weight, but as she was getting a better handle on her life, partly as a result of her successful writing career, she wanted to lose weight and partnered with diet firm Jenny Craig to lose 50 pounds, which was a remarkable feat for a woman of her stature (5’ 1”), but the weight loss made many comment on the changes to her facial appearance.

With her weight loss, she suddenly had excess skin hanging in folds around her face, which now looked sunken. It’s likely that these effects were accentuated by her dentures, which contributed to the collapse of her facial height.

With many of her public appearances at this point, people commented on the changes in her speech as well. Her speech was unclear, with many slurred letters, and a lazy pronunciation.

What’s the Impact of Her Dentures?

When you look at Fisher as Leia in The Force Awakens, you can tell she has dentures, but it’s hard to say what impact her dentures have on both her appearance and her enunciation. Certainly, her facial appearance is sunken and she sometimes looks as old (or older) than her mother, and that could be related to the dentures. Her speech in The Force Awakens is light-years from what she used in the original Star Wars, but that may or may not be due to her dentures.

This interview, for example, shows that it might not be her dentures at all. For most of the clip, she is speaking with the lazy, slurred enunciation that people blame on her dentures, but she has a remarkable moment at when she suddenly casts that off to parody how she first delivered her line “I recognized your foul stench when I was brought on board,” all full of Shakespearian faux British accent. She didn’t sound exactly as she did in 1977, but she also doesn’t have the same slurring.

Given that we know dentures don’t have to make a person look older and don’t have to interfere with speech, it seems unlikely that Disney would skimp on Fisher’s dentures, knowing what a dramatic difference it might make.

But those of you who have seen the movie, how do you feel? Were her dentures a distraction? Could they have been done better?