Bright Ideas from the Past: Adding Uranium to Denture Teeth

Natural teeth have a special glow that denture teeth can have a hard time matching. It’s called fluorescence, and it’s so important that in the past people thought it was a good idea to add uranium to dentures to help them look more natural.

Until they realized just how much radiation it exposed people to. Now we can get the same results without making your dentures radioactive.

If you’ve been to the rocks and minerals exhibit at your local nature and science museum, you’re probably familiar with the concept of fluorescence. It’s when ultraviolet light or other light we can’t see strikes a material, causing it to give off visible light. In our teeth, this happens in the layer underneath the enamel, called the dentin.

You’ve probably noticed that your teeth glow in situations where there’s a lot of ultraviolet light, like when you go to a nightclub or mini golf with black lights. But you probably didn’t realize that it also matters whenever you show your teeth in sunlight. Sunlight contains not only visible light, but UV light as well, and this helps make your smile look bright.

By comparison with natural teeth, denture teeth that don’t fluoresce will look dull and grey. So figuring out how to give denture teeth this property was pretty important.

Uranium to Make Dentures (and Their Wearers?) Glow 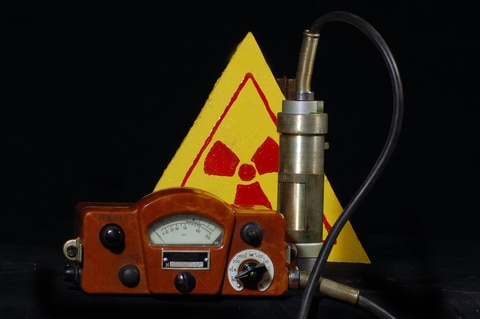 In 1942, they came up with what seemed like a brilliant solution. The world was at war, and some scientists in the US were experimenting with a wonder material of the age: uranium. It was determined that adding uranium to the teeth gave them the desired property. Perfect solution.

Until we began to understand the problems associated with radiation exposure, especially chronic radiation exposure that goes along with putting something radioactive in your mouth every day for the rest of your life.

There was a lot of controversy about how much radiation exposure people experienced due to uranium in dentures. Some people said it wasn’t a concern because most of the radiation was alpha radiation, the weakest kind, which can’t penetrate deep into the tissues to damage cells that can lead to serious cancers.

Not everyone was so sure, though. One study estimated that the total annual exposure due to uranium dentures was 66 rem per year at the surface, and 0.21 rem per year at the basal layer of cells, where cancer and other serious illness can develop. For comparison, the average surface exposure per year due to background sources in the US is about 0.36 rem. This means that the radiation exposure from dentures was nearly 200 times the background levels. Another study estimated surface radiation exposure of about 600 rem per year from uranium in dentures, nearly 2000 times the background levels!

When people began to realize the levels of exposure that were possible, they called for and won a ban on uranium in dentures in the US.

So, without uranium, how do we give dentures that natural glow? Well, with some dentures, the answer is: they don’t.

Cheap dentures often use the same plastic that is used in the base to make the teeth. This is unfortunate because the plastic, PMMA, is one of the least fluorescent plastics. This makes them look dull.

To get Dentures That Don’t Look Fake, we use high tech teeth that are made with non-radioactive rare earth metals that can make your denture teeth fluoresce just like natural teeth.

If you would like to learn more about what sets quality dentures apart, please contact a local FOY® Dentures dentist today for an appointment.