People who are considering dentures worry that once they get them the foods they can eat will be severely limited. Relatives, caregivers, and social support people worry that when people get dentures they won’t be able to get enough nutrition. That’s because the estimate of the types of foods a person can enjoy has traditionally been based on how many teeth they had.

But a new study from Japan tells us it’s not the number of teeth a person has that determines what foods they can eat, it’s how forceful their bite is. 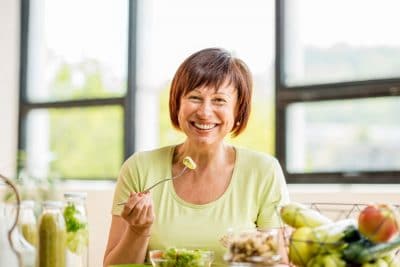 In a study involving 757 people aged 69-71, Japanese researchers hoped to gain a better understanding of nutrition among the elderly. Researchers measured the bite force of participants using pressure sensitive sheets. If participants wore full or partial dentures, they were asked to keep them in place when biting down.

Then they asked the participants to fill out a brief questionnaire about their dietary habits, including what foods they ate and which ones they avoided.

After adjusting results for gender and socioeconomic level, they found that nutrition didn’t depend on the number of teeth a person had. Bite force was what really mattered when it came to important nutrients that people get from some hard-to-eat foods like fresh vegetables, such as vitamin A, vitamin C, vitamin B6, folate, and dietary fiber. Only calcium and zinc were associated with having more teeth.

It’s not the Tools, It’s How You Use Them

This is a good reminder that people with dentures can still get good nutrition if they have properly fitting dentures that are fully functional. A previous study had shown that moving to implant-secured dentures didn’t improve nutrition.

But dentures do have to be properly fitted to give you good bite force. With FOY® Dentures, we typically verify bite force with TekScan to ensure that the force is adequate and evenly distributed.

To learn more about how they can help you, find a FOY® Dentures dentist near you.