We know that properly fitting dentures can help you eat a lot of different foods, but we had no idea they were capable of taking a bite out of inflation. But it turns out that in Singapore they did just that last month. 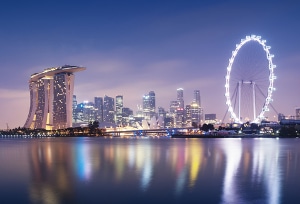 In recent years, Singapore has been combatting high rates of inflation, which soared to a massive 5.3%. However, in September, the country saw the lowest inflation rates in months, just 0.6%, and Bloomberg cites an unusual cause: dentures.

In September, a new price subsidy for dentures and other forms of dental and medical care took effect. The result was essentially to cut the cost of dentures by as much as S$266.50, about 15-50% of the cost of dentures. Although some analysts note that the effect of the subsidies benefits a “fairly narrow segment of the population,” the package actually impacts costs for a full 8% of the population, which gave it the potential to have a significant impact on the country’s inflation.

The program is called the Pioneer Generation Package, designed to protect and honor the generation of Singaporeans that helped establish the country on its path toward economic prosperity. It is available for people who were 16 years of age or older when Singapore gained independence in 1965, and who obtained citizenship before 1981.

Other contributors to diminished inflation include transportation and housing costs.

Dentures Are an Important Healthcare Expense

One of the notable things about this story is that the Singapore government has recognized how important dentures are to the health of its aging population. In the US, all too often dentures fall into a category of neglected needs, as Medicare and other assistance programs provide little to no benefits for them.

Although the government doesn’t always prioritize dentures, you should. And remember that quality dentures offer many benefits over economy dentures.

If you would like to learn what makes quality dentures a good investment, please contact a local FOY® Dentures dentist today.