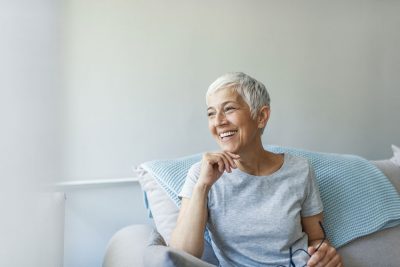 Not all of us feel as old as we are. There are a lot of factors that contribute to our perception of age, what scientists refer to as our “subjective age.” Dentures influence many of them, and, as a result, they may actually help you live longer, too.

How the Right Dentures Can Help You Feel Younger

Dentures can have a significant impact on how young or how old you feel. Culturally, just getting dentures can make you feel older, but not all dentures have the same effect. Some dentures enhance the sense of feeling old. Others can help you feel younger. The Denture Fountain of Youth® are high-end dentures designed to fulfill their name: helping you feel younger. Here’s how they do it.

One of the biggest factors in your subjective age is how old you look to yourself when you see yourself in the mirror. Many dentures can dramatically age you with things like wrinkles and witch’s chin. FOY® Dentures are designed to help you look younger, so when you look in the mirror there will be fewer signs of visible aging.

Another way that dentures can impact your subjective age is how well they help you maintain an active lifestyle. Exercise encourages your heart to stay healthy, and it maintains your muscles. Having a healthy heart and strong muscles helps you feel younger. And the more you feel younger, the more you feel capable of being active. It’s not just exercise, either. Traveling and trying new things stimulate your mind, maintaining its plasticity and youthful attitude.

How do dentures help with this? Your teeth play an important role in physical activity. They help stabilize the head, which improves balance. They also help provide a stable core for muscle activity, which helps you build strength. Properly fitting dentures fulfill these roles of natural teeth.This helps you feel that you feel stronger and more able to be active, which, in turn, helps you feel younger.

Be Comfortable to Feel Younger

It’s a cliche that old people are constantly complaining about their aches and pains. There is some truth to this. Muscles, joints, and organs develop more pain over time as we get older. So when we do feel more pain, it can give us a sense that we are actually older.

Another problem with dentures is that they can limit your diet. People with dentures often lean on soft foods, such as processed foods and junk foods. With high levels of sodium, fat, and sugar, these foods might make you feel good when you eat them, but over time they contribute to a sense of generally poor health, which can make you feel older.

FOY® Dentures are more secure and stable, so they make it easier for you to eat a wider range of foods, including unprocessed meats and fresh vegetables. This helps you feel healthier and younger. Implant dentures can be even better in this way–they let you eat all the foods you enjoyed with natural teeth.

You’ve probably cynically scoffed at those people who say “you’re only as old as you feel” (most of whom aren’t really all that old), but it turns out they might be right. At least, that is, according to a study conducted by researchers at University College London. Researchers looked at data from 6500 older adults who were asked a number of questions about aging as part of the English Longitudinal Study of Aging (ELSA).

It turns out that most people (nearly 70%) report feeling younger than their actual age. Although the average age of respondents was 65.8 years, the average subjective age was 56.8. Medical records confirm that those who said they felt younger than their age were less likely to die in the eight years between when the original survey was conducted and the follow-up study here. The death rate among those who felt younger than their chronological age was only 14.3%. The death rate among those that reported feeling about their actual age was a much higher 18.5%, while those that said they felt older than their age–only 5% of respondents–had a nearly 25% death rate.

Researchers said that feeling younger likely has some inherent benefits. Although subjective age often correlated for health problems that could lead to early death, when researchers corrected for health status, reported age still was independently correlated with a lower death rate. Researchers note that many other factors (some of which we talked about above) contribute to subjective age, including activity level, social engagement, and joy of life, and that these likely help people to live longer.

Get Dentures That Help You Feel Younger

There’s certainly no guarantee that FOY® Dentures will lead to a longer life, but they can definitely contribute to a better one. To learn about the benefits you could see, please contact a local FOY® Dentures dentist today.