Some dogs will eat anything. Including, it turns out, dentures. At least, that’s what happened to a Queensland, Australia man who left his dentures out one night and awoke in the morning to discover they’d been eaten by his retired greyhound Eleazar. 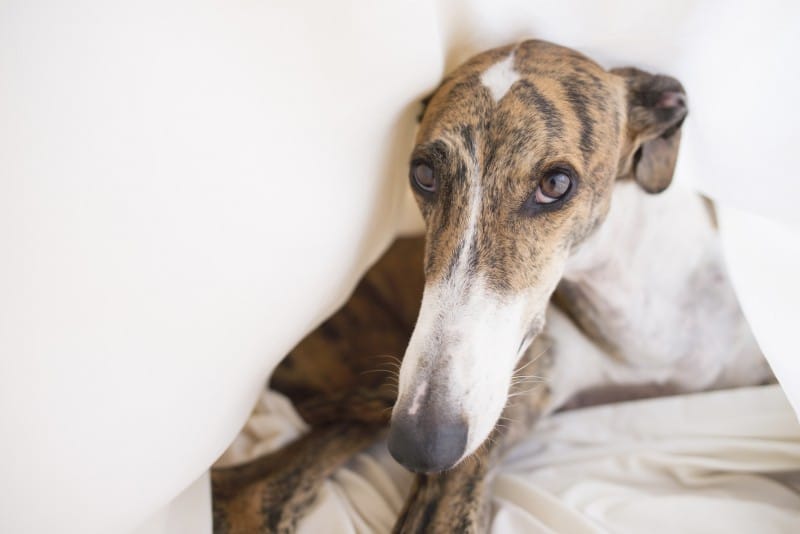 Keiron Butler is a greyhound trainer who lets his retired hounds stay in the house. One night, he stayed up watching rugby on the television, enjoying some pizza and beers, before he got tired and went to bed. Although he normally puts his dentures in the cabinet, this time he didn’t. Instead, he left it on the pizza tray with some leftover pizza as he went to bed.

He was awakened at three a.m. by a loud crunching sound. He assumed it was Eleazar getting into the pizza, though, he thought, “I didn’t think it was that crunchy.”

It wasn’t until the morning that he woke up and realized the truth. He looked around for his dentures, but couldn’t find them.

Then he went into the room where he worked with his hounds and found his dentures, in about “5000 pieces.”

He has had the dentures for years, as they were made for him by a client he used to train dogs for, who is now retired. For now, though, he is using an even more ancient set of dentures. These dentures were made for him by the army, he says about 30 years ago. Between fights and footy, he says, he got a number of teeth knocked out while in the service. He did some quick home repairs on the denture and has been wearing it since.

When asked if he was angry at his dog, Butler said no. He just patted her. She can even stay in her “luxury” accommodations in the house because, he says, “She’s my mate.”

How to Protect Your Dentures from Dogs

It’s actually fairly common for dogs to chew dentures, though the destruction is rarely as complete as in Butler’s case (and people aren’t usually as calm about it as Butler was). So how do you protect your dentures from becoming dog treats?

Butler notes that Eleazar probably thought the dentures were part of the pizza he often left out for his dogs to enjoy. He says it’s just because they were on the plate with the pizza, but it was probably also that the dentures hadn’t been thoroughly cleaned. Butler took his dentures out and went to bed without cleaning them, which means they probably had pizza residue on them, making them a tasty treat for the dog.

Making sure to brush your dentures thoroughly and soaking them in a cleaning solution will remove all food particles and ensure your dentures don’t smell appealing to your dog.

Keep Dentures out of Reach

Of course, Butler made a big mistake when he left his dentures in a place where the dog could get them. Especially knowing his dog was, in his words, “a real bowerbird. Everything she sees on my table she eats,” Butler should’ve taken more care to put his dentures up and out of reach of the dogs.

If you have dogs, it’s important to know their limits when looking for food. Don’t assume it’s just where the dogs can reach easily. Some dogs can climb quite high on counters and tables. During the day, your dog may seem lazy, but at night they sometimes have an amazing amount of energy they can employ to get a secret “treat.”

Get Dentures That Stay in

Although removable dentures can and should be taken out every night to clean them properly and help avoid disease risks, some dentures are designed to remain in your mouth. Hybrid dentures, a form of implant dentures, have many benefits above and beyond keeping your dentures out of your dog’s reach. They can support proper airway and jaw health while you sleep, making your sleep more comfortable and restful.

If you’ve lost your dentures to your dog chewing them up or any other circumstance and are looking for quality replacement dentures, please contact a local FOY® Dentures dentist today for an appointment.