It’s a story we’ve heard too many times before: a person goes to a dentist for help with tooth problems. The dentist recommends pulling teeth, then gives dentures. These dentures don’t fit right. The patient returns to get the dentures refit. Perhaps they return several times. But no matter how often they return, they can’t get properly fitted.

This is the problem with cheap dentures that are often fitted by dentists who use an unscientific method for making dentures. But in this story, the problem is even worse because after going back to get his dentures refitted, the man found that he couldn’t go back for refits because his dentist had been arrested. 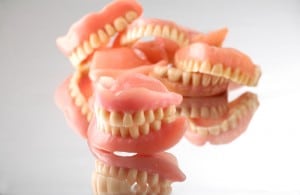 The dentist, Miranda Smith, had been arrested on charges of defrauding Medicaid for more than $140,000. She was accused of charging Medicaid for services not rendered, services she was not licensed to provide, and charging for dentist services provided by non-dentists at her practice.

Another problem was that she often recommended that patients have their teeth pulled and be fitted for dentures. In the case of 72-year-old James Reynold, she had his last teeth pulled and fit him with his dentures. That was in December. He went back to get them refitted, “half a dozen” times, he said, until he saw on TV that his dentist had been arrested, and that his was not the only case of this dentist pulling teeth and giving poor dentures. They included that of a 35-year-old woman who went to the dentist with a toothache (but no cavities), had all her teeth pulled, and poorly fitting dentures placed. That patient was kept on as a patient until her Medicaid money ran out, then she was sent away.

Since receiving his dentures in December, Reynolds has been unable to eat anything more solid than TV dinners. He gums all his food rather than suffer the pain of eating with his dentures.

After finding out about his dentist’s arrest, Reynolds went to another dentist, who told him his dentures were too large for his mouth and were poorly made. When he asked to get new dentures, he was told he couldn’t because Medicaid only allowed one set of dentures every five years.

When he appealed, he was allowed to get a replacement set of dentures based on the circumstances.

Get Dentures Right the First Time

If you are looking for dentures, it’s important to try to get them right the first time. As in the case of Reynolds, you might find it’s hard to get a second chance. Before getting dentures, ask to talk to previous denture patients, and always ask for a second opinion before going ahead with a plan to remove your teeth.

FOY® Dentures are fitted using a scientific process that eliminates much of the uncertainty of denture fitting. If you are looking for quality dentures that will fit right the first time, contact a local Strickland FOY® Denture dentist today.
By Dr. Rod Strickland|June 27th, 2014|Pop Culture|