George Washington’s Dentures Made Him Reluctant to Talk, Changed His Face 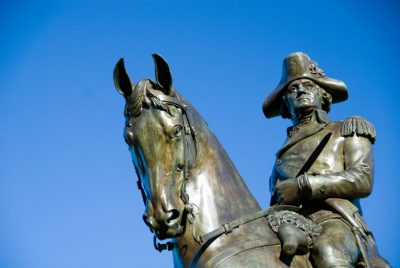 Of all the wearers of dentures, George Washington is probably the most famous. We tell many stories about Washington that are false. For example, the false story of the cherry tree (with its ironic assertion, “I cannot tell a lie.”) It’s true that George Washington did have dentures. However, he never had wooden teeth. But if they weren’t made of wood, what were George Washington’s dentures made of?

Washington’s Teeth Were Never Made of Wood

Over a lifetime of poor dental health (see below), George Washington owned many sets of full and partial dentures. None of them were made of wood. Instead, they were made of many materials, including bone, hippopotamus ivory, brass screws, lead, gold metal wire, and even human teeth.

Washington’s dentures predated the famous “Waterloo Teeth,” but soldiers were still a source of teeth at this time. It’s possible that those killed during the Revolutionary War may have “donated” their teeth to dentures. He saved some of his own teeth for use in dentures, and he may have paid poor people with good teeth to give them up for him. Some of the teeth may have come from slaves, as there is at least one transaction in his logs recording the purchase of 9 teeth from “Negroes.”

Washington first had his first tooth extracted at the age of 24. It cost him only 5 shillings (we can assume it was elementary for “Doctor Watson”), and for the rest of his life his diaries record references to tooth pain, lost teeth, inflamed gums, and, of course, his poorly fitting dentures.

He employed some of the best dentists on the continent, including a French dentist who fled from occupied New York to join the American cause. (It will be remembered that the French were leaders in dentistry at the time.) He paid constant sums for all types of prophylactics that were available at the time. This includes toothbrushes, teeth scrapers, denture files, and cleaning solutions. But despite the constant attention and investment, he couldn’t save his teeth. A dentist pulled his last tooth in 1796, at the age of 64, just three years before his death.

Also, despite the best in dental care, George Washington’s dentures were problematic, to say the least. If you look at pictures of Washington at different ages, you can see that his face changes shape. This was because of his bulky, poorly-fitting dentures, which recorded accurately by portraits. He complained about one set of dentures to his dentist. He said they were, “already too wide, and too projecting for the parts they rest upon; which causes both upper, and under lip to bulge out, as if swelled.” This must have bothered him, since it would violate his own Rules of Civility & Decent Behaviour in Company and Conversation, a compilation of 110 personal maxims. Maxim 16 starts, “Do not puff up the cheeks.” The next year he complained about another set, which had “the effect of forcing the lip out just under the nose.” The changes in his face shape are accurately recorded in portraits of Washington.

Washington’s ill-fitting dentures made him less willing and less able to speak. His speech difficulties must have bothered him greatly. In the Rules of Civility, he emphasizes clear speech. Precept 73: “Think before you speak; pronounce not imperfectly nor bring out your words too hastily; but orderly & distinctly.” This isn’t just a speculation of modern historians, his contemporaries often commented on his sparse words.

The technology of dentures has advanced a long way. In the 18th century the President of the United States employed the best dentists on the continent, but his dentures still didn’t fit. Now FOY® Dentures make it possible for everyone to get dentures that fit properly, enable you to speak and eat with ease, and, most importantly, preserve your face shape. And perhaps

To learn how you can benefit, please contact a local FOY® Dentures dentist today.