Everybody loves to watch a dramatic makeover. It’s incredible that someone can be so amazingly transformed in such a short period of time.Although we are past the heyday of the extreme makeover trend, our ongoing fascination with makeovers means that there are still several shows focused on this phenomenon out there.

One of these shows still on the air is the British program 10 Years Younger in 10 Days. A recent makeover on this program shows how dentures can help rejuvenate your appearance. While people initially guessed she was 10 years older than she was, after her transformation people guessed the was 49, five years younger than her true age. Dentures helped make her look 15 years younger. 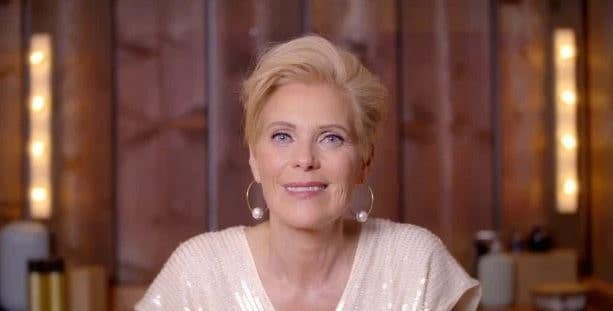 A “Dowdy” Mother of Three

Worse than the ratings of strangers, who Gail claims are unimportant to her, were Gail’s own feelings of aging and the loss of quality of life. She described her experience, “I was doing nothing – I just turned into this saggy old cushion on the corner of a saggy old couch. I just sat there, becoming gradually more and more invisible, more and more squashed.”

The woman felt she was “giving up” on her life. Her self esteem had been wrapped up in her facial appearance, but she now didn’t do anything about her appearance, not even wearing makeup the way she used to.

As she became aware of her diminished self, she wanted to change, but didn’t know where to start. It seemed a daunting, almost impossible task.

Dentures Made Her Recognizable

When we look at some of the descriptions people gave of Gail’s appearance, it’s easy to see how her poorly fitting dentures might be contributing to her aged appearance. First, there’s her own description of herself as “saggy.” Audience members also used similar language to describe her, talking about her saggy, wrinkled skin.

These are the kinds of changes that can occur as a result of poor dentures. Tooth loss causes our face to lose volume, which can make it collapse in on itself. This makes a person look and feel saggy. Dentures should reverse this effect, but they rarely do.

However, replacing her old dentures with better-fitting ones helped fill out Gail’s face. This made her feel considerably better about herself. She asserted her stronger will, saying, “I’m me, I’m that kick-a** person again’,  not that one lying down and being walked over.”

Perhaps most importantly, Gail describes her transformation saying, “I went from a face that I didn’t really recognize to one that I did.” This is an important point. While facelift surgery can often cause facial distortion, better-fitting dentures are more likely to provide rejuvenation and restoration of your own youthful facial proportions, which helps you look like you.

Dentures Can Help You Look Younger, Too

If you’re unhappy with your aged appearance, there are many treatments to consider, but one of the best options is getting new, better-fitting dentures. These can help you if you have a sunken, saggy, or wrinkled appearance. And, best of all, they rejuvenate you without changing your appearance. The Denture Fountain of Youth® is designed to help you look younger as well as improve the fit and function of your dentures.

To learn how these dentures could help your appearance and quality of life, please contact a local FOY® Dentures dentist today for an appointment.