There’s an old joke about two men who are sitting together on a plane—or maybe a train, it’s that old. One of the men is having significant pain from his new dentures, and he keeps shifting them around comfortably. After a while, the second man, elegantly dressed in a dark suit, says, “Are you having trouble with new dentures?”

The first man says, “Yes. They fit terrible, and I can’t stand it!”

The second man says, “Maybe I can help.” He reached into the pocket of his dark jacket and pulls out a set of dentures. The first man says he couldn’t possibly try them on, but the second insists they’re sterile and should be tried. So the first man tries them on, but says they’re too tight.

The second man pulls out a second pair, saying, “Try these.” The first man puts them in. They’re not painful, but they don’t stay in place. “These are too loose,” the first man says, handing them back to their owner. 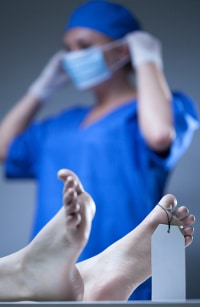 The second man says, “Then these should work.” And, sure enough, the third set of dentures fits perfect.

By this time, they’ve reached their destination, and the two men get up. The first man says, “Thanks a lot! What luck to be sitting next to a denture dentist on this trip.”

The second man smiles as he puts on his top hat, and says, “I’m not a dentist, I’m a mortician.”

Sadly, that joke may have an unfortunate truth for people in Macedonia, where a man was recently arrested for robbing graves and reselling dentures he found.

The man under arrest is a 52-year-old guard at an Orthodox Christian cemetery in the town of Tetovo. Apparently, the man was trying to supplement his income by digging up graves, then prying gold crowns off the teeth and taking dentures. When taken into custody, police in Tetovo say that the man had 12 sets of dentures and four gold crowns. They believe he was going to sell the dentures and crowns in neighboring Serbia.

Dentures Feel Like They Were Made for Someone Else?

Although the joke simplifies the situation, the grave robber story shows that sometimes dentists are willing to sell dentures that are not really customized to the patient. In the US, we don’t have a problem with grave robbing for dentures, but many economy dentures they might feel just as bad as if they weren’t designed for you.

If you are tired of living with poorly fitting dentures and want to get some that really feel like they’re made for you, please contact a local FOY® Dentures dentist today.