Pneumonia Risk When Sleeping with Dentures

Your dentist has told you not to do it. Hopefully you don’t, but if you do sleep with your dentures in, this new study should change your mind. Researchers looking at seniors of very advanced age (85 or older), found that wearing dentures could more than double the risk of contracting pneumonia. 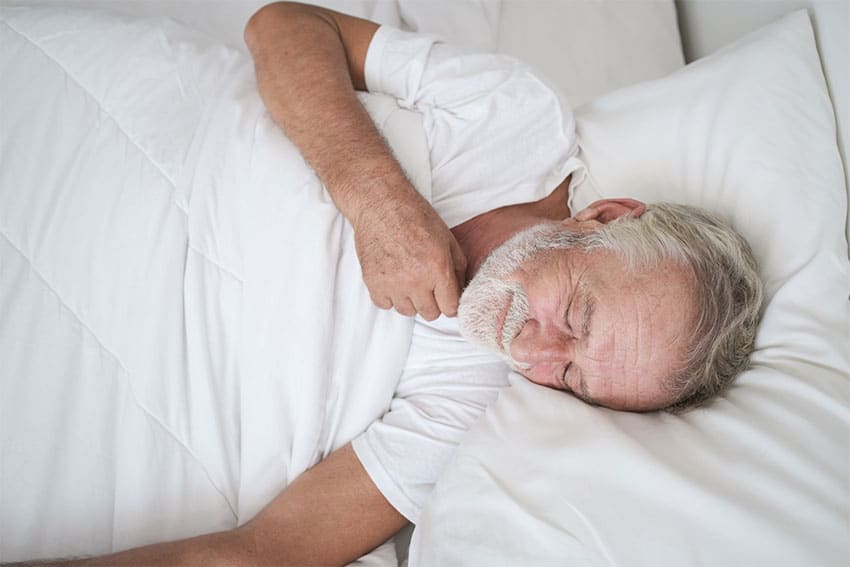 This study looked at more than 500 people over age 85 (average age 87.8), who were living in a community setting. This population had a number of potential risk factors that could increase their risk of pneumonia, including cognitive impairment, prior strokes, and previous history of respiratory disease. Researchers gave all study participants a thorough oral health exam.

They followed them for three years and found that there were 48 serious pneumonia events (including 20 deaths and 28 hospitalizations). In the 453 denture wearers, 186 did not remove their dentures at night, about 41% of the total, which seems a high number, given the common instruction to take dentures out. Among denture wearers, those who didn’t take their dentures out were 2.4 times more likely to develop pneumonia. This was more than the elevated risk associated with cognitive impairment (increased risk 2.2 times) and a history of respiratory disease (increased risk 2.3 times). Only a prior stroke increased people’s risk more than wearing dentures (increased risk 2.5 times).

Most likely, oral bacteria on dentures is responsible for the increased risk. Oral bacteria often contribute to pneumonia risk. When we breathe, this bacteria travels into our lungs. This leads to lung infections that can be dangerous or deadly.

Overnight, this risk increases. Saliva production decreases as we sleep. Since saliva helps control oral bacteria, less saliva means more oral bacteria, which breathing transports into our lungs. The danger is even worse when someone breathes through their mouth as they sleep.

Nor was pneumonia the only increased risk associated with wearing dentures at night. In fact, there were several other health consequences. People who slept with dentures in were more likely to have tongue and denture plaque, gum inflammation, presence of candida fungus, and higher levels of interleukin-6 (IL-6), a compound associated with the body fighting infection. However, IL-6 is also linked to chronic inflammation. Research links chronic inflammation to cancer and dementia.

Although these are not as serious as the pneumonia risk, they are noteworthy because they can decrease the quality of life and lead to more serious consequences later on.

Could This Increase COVID-19 Risk?

Of course, when talking about respiratory illness these days, it’s hard not to consider COVID-19 risk. There is no evidence suggesting that wearing dentures affects COVID-19 risk. Nor do we know whether sleeping with dentures could increase risk.

However, it seems plausible that the novel coronavirus responsible for COVID-19 could lodge on dentures. Then, during sleep, the inhaled virus would travel to the lungs, leading to infection. To prevent this, it seems smart to take dentures out at night. It also seems smart to clean dentures after exposure to someone who might be carrying the virus. However, there is not really any evidence to support the effectiveness of this action.

If you would like to learn more about proper denture care, please contact a local FOY® Dentures dentist today.