Thief Arrested after Leaving Teeth at the Scene

It’s not exactly that we want to say better-fitting dentures will make you better at a life of crime, but it sure does seem that way. Poorly fitting dentures seem like nothing but trouble. And here’s a case in point: a British burglar who was arrested after leaving his false teeth behind at the scene of a robbery.

Just Some Beer and a Snack 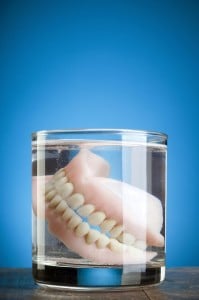 Justin Stansfield broke into a garage and helped himself to a case of beer from a refrigerator. While taking out the beer, he noticed that there were some popsicles in the freezer, which he wanted to enjoy. Unfortunately, he couldn’t eat them with his dentures in, so he took them out as he ate the popsicles. When finished, he grabbed the beer and left, but he didn’t take his dentures with him. He either forgot about them or knocked them down the side of the freezer as he was going and decided to leave them.

A few days after the theft, the garage owner discovered the teeth and told police that he suspected they belonged to the beer-and-popsicle thief.

When police collected the dentures, they connected them to a man who had already been charged with other burglaries in the area, including an attempted burglary of a retiree, who chased him off with a walking stick.

FOY® Dentures are the best-fitting dentures available, and they can make you more fit for whatever life you choose, and hopefully it’s an honest one!

To learn how they can help you, please contact a local FOY® Dentures dentist today.