Three Ways You Lose Your Teeth

Although tooth loss is becoming less common in this country, there are many of us who are still at elevated risk for losing our teeth. Infected gums, infected teeth, and a bad bite are all potential causes of lost teeth, and people who have all three have the worst risk of tooth loss.

Infected gums are the most common cause of adult tooth loss in the US. Also known as gum disease, or periodontal disease, this is when bacteria colonize the pocket between your teeth and gums. They damage the tooth and the gum tissue, causing a separation between your teeth and gums. The bacteria eventually begin to destroy the bones that surround the teeth, putting them in jeopardy.

Worse, your body’s own immune response eventually escalates to try to attack the bacteria, destroying more bone as well. 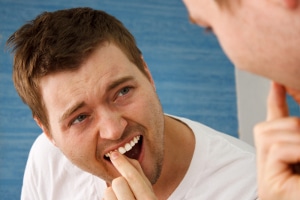 Infected teeth, also known as abscessed teeth, are the end product of what starts as a simple cavity. When the bacteria causing a cavity penetrate through the enamel (white outer layer) and dentin (yellowy middle layer) of a tooth, they reach the tooth nerve. Once they reach there, they colonize it, often causing excruciating pain, but also destroying the tooth from the inside.

Bacteria can also pass through the tooth into your bones, other teeth, and even your sinuses on their way to the brain, which makes abscessed teeth potentially deadly, as well as a major threat to your teeth.

How a Bad Bite Threatens Teeth

In addition to threats from outside, your body’s own systems can put teeth at risk. If you have a bad bite, some or all of your teeth are subjected to excessive force that can loosen your teeth. The excessive force can stretch the periodontal ligaments that hold your teeth securely in place.

It can also cause your body to remove bone around the tooth. Our body naturally removes bone from high-stress areas, and this process is similar to what happens when someone has braces, but it’s uncontrolled and can lead to tooth loss.

A bad bite can also cause the teeth to flex under stress, causing them to crack, which makes them more susceptible to erosion and decay.

These three effects also work together to hasten tooth loss. The bacteria populations that infect your teeth and gums can work together to overwhelm your body’s immune system, and stimulate the response that causes your body to attack your bone. Loosening caused by bad bite can make it easier for bacteria to colonize around the tooth. Flexing caused by bad bite makes it easier for bacteria to penetrate the tooth. And when a tooth is loosened by gum disease or weakened by decay, a bad bite can cause it to break or fall out.

The people who have all three of these risk factors are most likely to lose all their teeth and need dentures.

Two pieces of good news. Knowing how these factors fit together allows us to treat them together. And even if we aren’t able to save your teeth, at least we have better denture options than in the past.