Veteran Gets Free Dentures for Christmas

Tis the season for generosity, and when it comes to dentures, it’s no different, especially for a veteran in Killeen, Texas, the home of Fort Hood. After a nearly fatal battle with pneumonia, James Bittle, 51, was given free dentures by a local dentist.

In August 2010, when working as a logistics contractor on the base, Bittle experienced cold-like symptoms. He went to the VA hospital, where he was told he had the flu, and sent home. However, his cough persisted through November, when he continued going to work. Finally, after pleading from his family, he went back to the doctors.

At this point, he was diagnosed with severe pneumonia. His lungs were almost completely full of fluid and his heart was operating at only 24% capacity. He received outpatient treatment until he developed congestive heart failure, when he was hospitalized.

Losing Everything, Including His Teeth 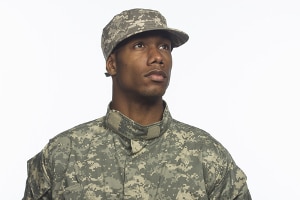 Bittle then fought a long-term battle against his pneumonia and heart problems. His weight dropped from a robust 260 pounds to just 105 pounds in 2011. He spent most of his money, lost his wife, and his home.

He recovered, but now has a pacemaker and needs to live a stress-free life to protect his heart. With volunteer counseling, he has calmed himself and helped share hope with others.

However, Bittle has been afflicted by teeth that also suffered as a result of his health struggles. He said he was in constant pain and couldn’t keep food down as a result of the poor condition of his teeth. But without dental insurance coverage, Bittle couldn’t afford to have them treated.

A Denture Dentist to the Rescue

Bittle was given a list of dentists to talk to about possibly providing treatment. All of them declined.

He nearly gave up hope. But his fellow volunteers recommended he see a different practice, where the denture dentist decided to provide treatment for free. His teeth were removed at Thanksgiving and in mid December he received full custom dentures. Grateful for the help, Bittle has promised to pay the blessing forward.