Last week, President Barack Obama honored two overlooked World War I soldiers with medals of honor. The soldiers, whose families have long campaigned for their recognition, were ostensibly not recognized because of their ethnicity–one was African-American and the other was Jewish.

But it isn’t just in the US where people are working to give honor to the soldiers who served and sacrificed in WWI. In Britain, an organization known as the Joint Casualty and Compassionate Centre (JCCC) is striving to identify as many soldiers as possible based on surviving relics from the war. Once the remains have been identified, JCCC will organize burials for the soldiers and for the benefit of their surviving relatives. Among the remains that are being used to identify these soldiers are their dentures, but these are not always the most helpful clues. 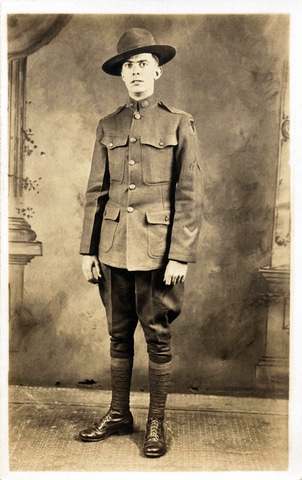 The British Dental Association (BDA) was presented with an upper denture that was discovered in 2013 near the Belgian city of Ypres (ee-preh), which was the site of five bloody campaigns, including the Battle of Passchendaele (the third battle of Ypres), which is often considered one of the worst tragedies in British military history. Hundreds of thousands of Britons lost their lives at Ypres, including tens of thousands of troops from elsewhere in the Empire, such as Australia and New Zealand. So it’s no surprise that there should be many relics of unknown soldiers here.

One such relic was this upper denture. A vulcanite denture with high tech teeth (the kind of denture that the US Army wanted to avoid using for its troops), the denture seemed to have some identifying marks on it.

The denture was marked with the name “Rauhe,” and the JCCC suspected this might help them track down the owner of the dentures.

A Primitive Method to Secure Dentures

However, when the BDA saw the marks, they realized that the name referred to the suction disk on top of the denture. In WWI, as now, traditional upper dentures were held up by suction. But because manufacturing processes were not as precise as today, it was hard to get a good seal on the upper dentures, which means that these dentures rarely stayed in place even as well as the cheap dentures available today. To improve suction, a German inventor came up with the idea of putting a small suction cup on the top of the denture (yeah, the same kind of suction cup you might see on the end of a plastic gun dart). That inventor’s name was Rauhe, which is why the disk bore that name.

It is good to know that denture securement has improved dramatically over the last hundred years. Now if you want dentures that are more secure than traditional dentures, you can get FOY® Dentures or make them really secure with implant dentures.

To learn how you can get dentures that truly stay in place, please contact a local FOY® Dentures dentist today.